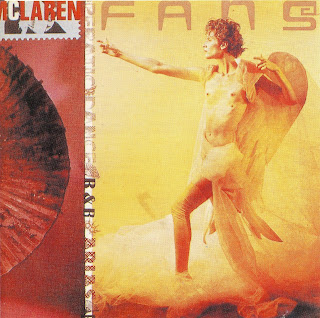 Released in 1984 this is an incredibly difficult album to find but every once in a while it does come up for sale on E-Bay. I scoured the Flee Markets for a few years before I acquired my copy. For those dumbass's that don't know who Malcom McLaren is, he was the manager of iconic punk rock band The Sex Pistols during their meteoric albeit short lived rise to glory during the late 70's. Over the years he experimented with many sounds and idea's. Many call him innovative, while other claim he did nothing more than steal original ideas from others and make them his own. There are argument to merit both sides, and I suspect he may be a little of both. This album is his attempt to fuse Opera, 80's New Wave and R&B together to create an entirely new sound and if do say so myself it worked out incredibly well. The stand out track on "Fans" is of course Madam Butterfly, the single that charted on both sides of the Atlantic. It's an amazing creation of two musical genre's that are seldom mixed and he pulls it off successfully. This album is by no means perfect, the rest of the album is more of the same but none of the other tracks seem to work anywhere near as well as Madam Butterfly, although I do like "Boys Chorus". If you find this album grab it, its worth it just for the one single and also I would think as a collectors item in a few years.
.
The Tracks are as follows...
.
"Madam Butterfly" ( UnB el di Veremo)
"Fans" (Nessun Dorma)
"Carmen" (L'Oiseau rebelle)
"Boys Chorus" (La sui monti dell' Est)
"Lauretta" (O mio babbina Caro)
"Death Of A Butterfly" (Tu Tu Piccolo)
.
Produced by Malcolm McLaren and Robbie Kilgore
Produced and Engineered by Stephen Hague and Walter Turbitt
.
Virgin Records
Posted by Sandman at 3:41 PM No comments:

Another band that I liked very much that never seemed to reach their full potential ( at least not in North america ) was The Church. They were another Australian band formed in Canberra in 1980. Initially associated with New Wave sound of the mid 1980s, their music later became more "prog rock" featuring long instrumental jams and complex guitar interplay. In 1988, With the album Starfish and the American Top 40 hit "Under the Milky Way." they had there most significant comercial success. I believe this song was one the best singles of the 80's and I'll include a link to the video so you can check it out. The band went through several line-up changes in the 1990s and continue to perform to this day. In 2007, they recorded new music to soundtrack a short film based on Jeff Vandermeer 's book Shriek: An Afterword . The band has put together an internet-only album that compiles the extended tracks and the film was released to the internet on August 14 this year. The members are as follows...
.
Steve Kilbey
Marty Willson-Piper
Tim Powles
.
Peter Koppes
.
former members...
.
Nick Ward
Richard Ploog
Jay Dee Daugherty

I'm looking forward to picking this up, It's hard to believe that there's never been an official Sex Pistols concert DVD. The Great Rock 'N' Roll Swindle, The Punk Rock Movie, D.O.A. and The Filth And The Fury featured live Pistols footage, but there hasn't been an official DVD or video of the Pistols in action. That changed on Oct. 14 when Rhino Records released " There'll Always Be An England ". The footage is from a show that the band's original lineup (singer Johnny Rotten, guitarist Steve Jones, bassist Glen Matlock and drummer Paul Cook) performed at London, England's Brixton Academy last November. The set list features songs from Never Mind The Bollocks, their cover of The Stooges' "No Fun," the B-side "Did You No Wrong" and covers of The Monkees' "(I'm Not Your) Steppin' Stone" and Jonathan Richman's "Roadrunner" from The Great Rock 'N' Roll Swindle.The DVD also comes with more than 90 minutes of bonus material, including a documentary called The Knowledge. Julien Temple directed the piece, in which he follows each Sex Pistol around London as they revisit their old stomping grounds and see how they've changed.
Posted by Sandman at 5:49 PM No comments: