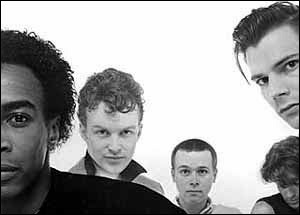 ....A band started by Chris Wardman and Paul Humphrey they were another Canadian backlash against the corporate controlled airwaves of the 1970's. Blue Peter was from Toronto they formed in 1978 and gained allot of success during the early to mid 80’s. As I’ve mention previously one of the things that characterized the 80’s was a musical upheaval, smaller independent bands began to wage war against the fascist North American record industry which had barred the gates for new talent. Blue Peter was at the forefront of this war, with a completely original sound this new wave band was the very thing that made the alternative scene so interesting and appealing. The brutally restrictive 70’s created the perfect environment or breeding ground for bands such as this who were at the time just trying to get there music heard.
....Funny enough the first time I saw this band live I was with a crowd that geared more towards the punk scene rather than the new wave scene preferring stuff like the Sex Pistols or the Dead Kennedys over Alphaville or Simple Minds. Blue Peter was less electronic, and a more guitar oriented band so they could be construed as a sort of cross over between the two genre’s somewhere between rock and new wave stylistically. Most importantly though they are responsible for some really great tunes that everyone liked regardless of what genre you’re into. Their shows were characterized by an eclectic mix of new wave and punk fans with a few of the main stream crowd thrown in for good measure, which tends to happens once your videos make it to MTV.
....Blue Peter reached their Zenith in 1983 with the release of their seminal album “Falling” which yielded the massive hit 'Don’t Walk Past’ recorded under the Ready Records label. This solidified the band as a Canadian Indy Powerhouse on the presipus on international success, a band that despite the odds now seemed positioned to take the world by storm. It's hard to forget the cutting edge Film noir video for "Don’t Walk Past" featuring Paul Humphrey’s unorthodox dance as he navigates that smokey hallway one the most innovative videos of that era (link below). It received wide acclaim as well as airplay, it can still be seen on YouTube although it’s desperately in need of some restoration as are many of the videos from this time. Following the success of “Falling” Blue Peter was invited to participate in The Police Picnic in 1983 at CNE Stadium and also opened for Simple Minds during their Canadian Tour in 84. They toured extensively during this time playing sold out venues across the country including the Ontario Place Forum which seated up to 18,000 people. Sadly this is the peak for Blue Peter the possibility of international success would never come to fruition as the band broke apart in 1985. Sighting a grueling touring schedule and a seven year workload that had left the band drain they decided to call it quits, and in doing so added yet another page to the book of bands that failed to achieve there full potential. Many fans myself included were distraught and left wondering how far they could have gone.
,,,,Happily Blue Peter does re-unite from time to time and play a show, much to the thrill of their fans who continue to keep the faith. Their most recent gig was September 2009 at Dundas Square in Toronto (according to their web site). I missed my last the opportunity to see them perform a joint concert with the Spoons at the Pilot Room some time ago ,but hopefully I'll have the chance to see them again in the future.

Posted by Sandman at 2:59 PM No comments: 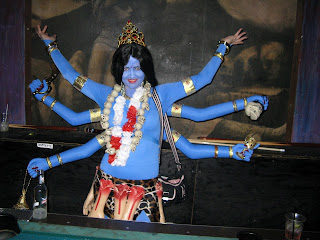 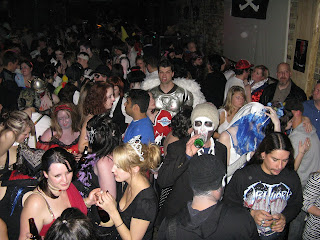 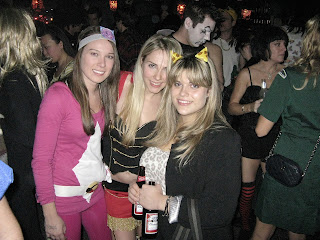 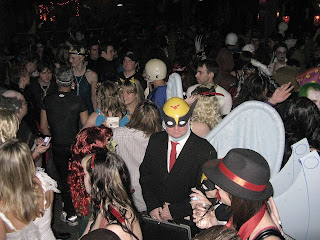 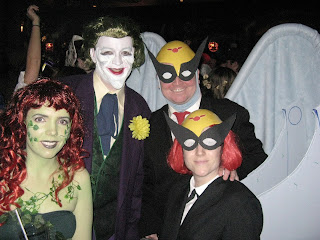 ....Last Saturday we were at The Velvet Underground in Toronto, located on Queen St. it's one of those legendary bars that's been a part of my life for as long as I can remember. Halloween is always a great night at the Velvet and last weekend was no exception. The place was packed and there was a massive line up outside waiting to get in. We arrived early to avoid the non-sense there's nothing I hate more than standing in a frackin lineup. The thing I like most about the Velvet is that nothing ever seems to change, not the music not the people, and not the atmosphere yet at the same time they seem to years ahead of the mainstream when it comes to just about everything if that makes any sense. One things you'll notice immediate is the diversity in the crowd. The average age of the people that frequent this place is anywhere between 18 to 50 it has always been and always will be Toronto's best night spot, especailly for those that like to be different. Above are some pics I took, it was a pretty wild night and happily all we survived it.
.
...to see the pics in full size just click on the images they will enlarge.
Posted by Sandman at 7:24 PM No comments: