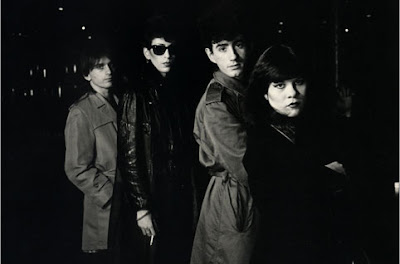 .....Back in the 1980's and to a lesser extent the early 90's their was a venue in Toronto that played host to some of the greatest bands that I have ever seen. It was called The Concert Hall and it was located on Young Street in the heart of Toronto. Although most would be hard pressed to remember it today back in the mid 80's everyone who was anyone played there. It wasn't a big place, it only housed about 1500 if memory serves me, yet most bands seemed to end up performing their at one time or another. To name just a few U2, Simple Minds, The Sex Pistols, The Spoons, Love & Rockets, Billy Bragg, Public Image Ltd, etc...you get the picture. Anyway A Flock Of Seagulls were in town playing the Concert Hall and it so happens I was in attendance, normally I don't pay too much attendance on the opening act, but on this night it was different. The opening band on this night was the Comateens, an upbeat New Wave group from New York City with an infectious energetic sound

....A pretty loyal following in the Northern States and especially New York were they' play clubs like Max's Trax, Heat, The Blitz, and of course CBGBs, they also 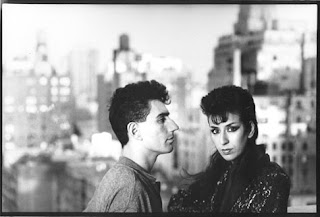 has success across the pond in Europe touring France and Belgium on more than one occasion. The did one Canadian tour as well in 1984. The Comateens originally formed in 1978 as duo, Nick North and Romona Lee Jan met in a New York recording studio and began to write songs together. In December of the same year Lyn Byrd joins to do vocals and they become a three peice. The first songs ever pressed to vinyle by the Commateens was on a New Your Based compilation album called 2x5, as the name suggests it was a compilation of 5 bands each contributing two song. The Comateen contributed "Late Night City" and "Overseas". With regards to their catalog it can get a bit confusing, there were two studio albums, "Comateen" (self titled) and "Pictures on a String", there were also various 45's and videos releases more info can be obtained at their web site below.


The Comateens are as follows...


Band members changed over the years and there was also the tragic death of Oliver North and Nic North, so the musician below were involved with the band at various stages between 1978 and the present. 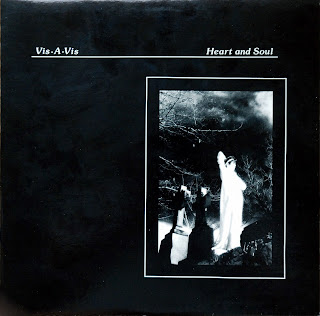 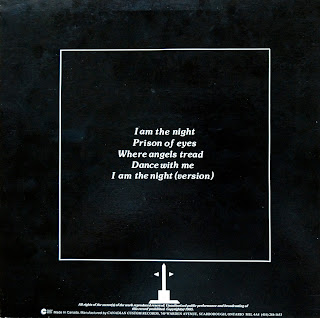 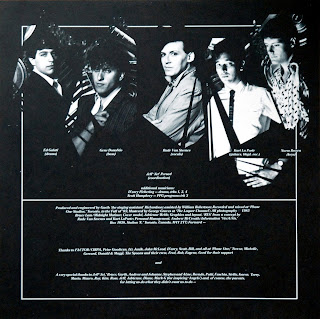 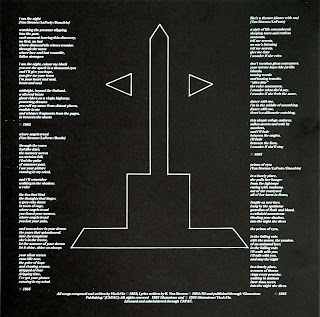 ...One of the most fascinating things about the 80's was the hundreds of tiny independent record labels that waged war against the corporate machine that controlled a stagnating music industry at the time. Hundreds perhaps even thousands of small and medium sized bands from all over the world took part in this backlash, assaulting the airwaves, the charts, and most importantly the club scene. Independent college and University Radio stations along with non-commercial radio like CFNY ( back when they were still good ) help make us aware of the existance of these bands. It became a weekend passtime to head downtown to small record shops in search of hard to find albums and 12'inch singles, both domestic and imported.
.....One of the smaller, but very talented groups involved was Vis-A-Vis a Canadian New Wave band that gained a relatively loyal following during the mid 80's. The album shown above belongs to me and it's in almost perfect condition, an incredibly rare find. My original copy purchase back in 86 received regular rotation at the bar I used to DJ, sadly that copy has long since disappeared. This copy I found about a year ago at a flee market and I was to say the least absolutely thrilled. Heart and Soul is a mini album, it only has four tracks, five tracks if you include both versions of "I am the night". They have a distinctively new wave sound, with multiple keyboard layers but also featuring a prominent bass line intertwined with strong guitar riffs throughout, Rude Van Steenes provides some great vocals to round out the project. I would describe it as a cross between INXS an Simple Minds, yet it still retains an original sound. An excellent piece of work by a band that's gone but not forgotten.
'
Track List
.
I am the night
Prison of eyes
Where angels tread
Dance with me
I am the night (version)
.
Vis A Vis are...
.
Ed Galati (drums)
Gene Donofrio (bass)
Rude Van Steenes (vocals)
Kurt La Porte (guitar, backing vocals)
Norm Brown (keyboards)
.
additional musicians...
.
D'arcy Pickering - drums track 1,2,4
Scott Humphrey - PPG programs trk 3
.

Heart and Soul
.
Produced by Garth Richardson, assisted by William Robertson
Recorded and Mixed at 'Phase One Studios' Toronto in the fall of 1985
Glamatron Publishing / CAPAC / Vis:A:Vis
.

Vis:A:Vis also thanks the Spoons and their crew for support on this project.
Posted by Sandman at 3:53 PM 8 comments:

I get Along - Pet Shop Boys

"I get along" is a single by the Pet Shop Boys from their album Release. A love song, Neil Tennant has also hinted that it can also be interpreted as commentary on the then fraught relationship between British prime minister Tony Blair and New Labour architect Peter Mandelson after the later had to resign from the British Cabinet after a second major scandal he was involved in. This is a beautifully video it portrays a number of young actors in a New York artist's studio and also features Russian super model Natalia Vodianova (before she became famous). Natalia grew up in a poor district of Gorky USSR. She enrolled in modelling at age 15 and by 17 she'd moved to France to establish her self as a successful runway model. Today Vodianova is ranked 14th in the U.K. as one of the World's Greatest Supermodels and has done the cover of every major magazine in the world. But Natalie is more than just a pretty face, she is the founder and the President of the Naked Heart Foundation, a philanthropy that strives to provide a safe and inspiring environment in which to play for every child living in urban Russia.
.
Posted by Sandman at 10:49 AM No comments:

Wishing ( If I Had A Photograph Of You ) 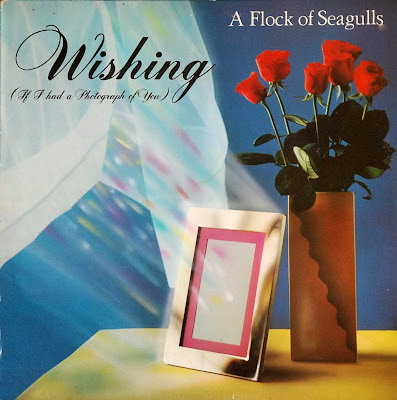 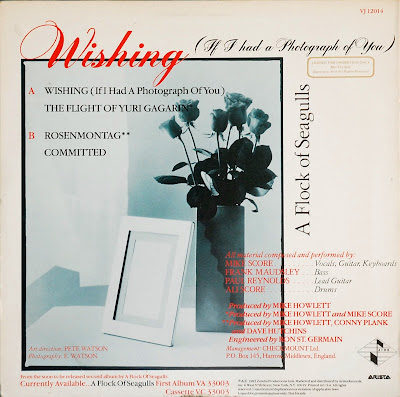 
..... Released in 1983 this was the first single off there second album LISTEN. The photo above is the artwork from the EP ( for those idiot industry people EP stands for Extended Play a.k.a. the 12'inch single...) "Wishing" peaked strongly in Great Britain and in Canada where it reached the Top 10, in the U.S. it reach #26 on the Billboard charts, it also charted in Germany as well. The version above is my personal copy, it's just over 6 minutes long (6:03 to be exact) it's the version that received regular rotation in all the dance clubs, the original version of this song clocked in at nearly 14 minutes. It also holds the rare distinction of having been performed almost entirely on the black keys of a keyboard.


Side A.
Wishing ( If I Had A Photograph Of You )
The Flight Of Yuri Gagarin
.
Side B
Rosenmotag
Committed
Posted by Sandman at 4:01 PM 2 comments:

Labels: -My 12 Inches, A Flock of Seagulls 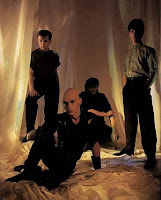 A band I always intended to explore more closely but just never found the time. Classix Nouveaux are Sal Solo (vocals/guitar, synthesizers) Mike Sweeney (bass guitar ) B.P.Harding (drums, percussion), and Jak Airport (lead guitar) Airport was replaced by Gary Steadman (guitar). Steadman left in 1982 to be replace by Jimi Suman who played a number of instruments. Categorized as a New Romantic band this group did the bulk of their recording and touring between 1981 to 1983. They first gained popularity in 1981 with the release of their hit single "Guilty" which received extensive airplay in Britain. They did two European tours that year and began to gain a loyal following. Their debut album Night People was also released in 1981, it was actually released in 27 countries and charted in many of them, they spent the remainder of the year on an 11 country tour which included Sweden, Yugoslavia and Portugal to name just a few. Releasing their next album La Verité in 1982, led to their highest UK charting single, "Is It A Dream" the band toured worldwide. In 1983 their final album was released Secret featuring tracks such as "Never Never Comes" and "Heart From The Start". They were one of the first modern bands to perform in communist Poland, they also played other Eastern block countries like Hungary and Czechoslovakia, their largest crowd ever for a concert was in Helsinki, Finland where 25,000 attended . This was truly a band without boarders if ever one existed, in addition to the previously mentioned nations they also played India and became the first western rock group to play Sri Lanka.
.