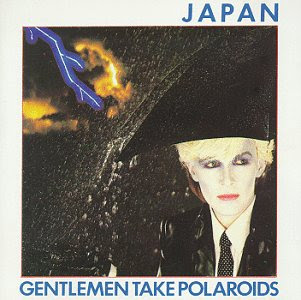 .....Japan actually formed in in 1974 but are largely associated with the 1980's as this was the period in which they achieved most of their success. Be it intentionally or not, many music fans (myself included) associate Japan, in terms of genre, with the New Romantic movement. They were a reaction in both style and sound to the doldrums of the 1970's. Ironically, just as internal conflict began to tear the band apart, they released two of there most successful studio albums, Gentlemen Take Polaroids, in 1980, and Tin Drum, in 1981. By 1982, following the successful release of Tin Drum, the final curtain came down on Japan, and the band broke up, reforming partially and only momentarily in 1990.
.....Gentlemen Take Polaroids was the first of two studio albums releases under the Virgins records label, and it's an exception piece of work. Like many of the great albums of this era, this one was produced by John Punter, a legend in his own right. One can't help but notice some similarities between this album, and Duran Duran's first release, specifically with respect to the the keyboards, and of course the vocals of David Sylvian. I also find myself hearing similarities indicative of later Roxy Music (Avalon, Flesh + Blood), especially in songs like "Swing" and "The Experience of Swimming". Like much of the New Romantic releases of the time, Japan experiments with a variety of sounds, and the keyboard takes prominences, this typical in tracks like "Burning Bridges", and "Ain't That Peculiar". That said, the over-all sound is still balanced by the guitar work of Rob Dean and some great saxophone work by Mick Karn.
.
Track List
1. Gentleman Take Polaroids
2. Swing
3. Burning Bridges
4. My New Career
5. Methods of Dance
6. Aint That Peculiar
7. Nightporter
8. Talking Islands In Africa
.
Produced by John Punter
Virgin Records
JAPAN are...
David Sylvian.........Rob Dean..........Richard Barbieri..........Mick Karn..........Steve Jansen
Note: This CD was re-released in 2003.
The re-issue contains three additional tracks ."The Experience of Swimming", "The Width of a Room" and "Talking Islands In Africa"
.
Below...The Title track from the album which is nothing short of spectacular...
Posted by Sandman at 9:30 AM No comments: