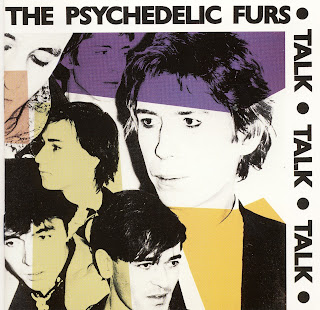 There are albums I've continued to spin over the years, albums that I never seem to get board with, this is one of those albums. I first picked it up in perhaps 1983 on vinyl two years after its original release in 1981. I was just starting to discover the whole new wave scene and was looking for new stuff to listen to, it didn't take long to find this gem. Considered by many to be the Furs best work Talk Talk Talk is the second of five releases by The Psychedelic Furs. Produced by Steve Lillywhite it helped establish the band not only in the UK but North America as well. A solid album from beginning to end it yielded two charting singles "Dumb Waiters" and an original version of "Pretty in Pink" which slightly different than the version used in the John Hughes film. A raw hard edged sound but at the same time well composed an melodic, it is an excellent example of the work being done in the post punk era by a band that knew how to write good songs. I absolutely f--kin love this album, the saxophone work is exception, pick it up...
The Tracks are as Follows, including bonuses on the CD re-issue.
.
1. Dumb Waiters
2. Pretty In Pink
3. I Wanna Sleep With You
4. No Tears
5. Mr. Jones
6. Into You Like A Train
7. It Goes On
8. So Run Down
9. All Of This And Nothing.
10. She Is Mine
.
Bonus Tracks
.
11. Mr Jones (single version)
12. So Run Down (early version)
13. All Of This And Nothing (demo)

Posted by Sandman at 8:19 AM No comments:

New Wave / Power Pop
.
Though not entirely familiar with their work this is what I do know about the group. From Melbourne Australia they played their first professional gigs in 1980. They were at first a garage band consisting of five members in 1979. Mark White ( vocals and drums ) and Mick Vallance (vocals and Base) and three unknown members that were dropped after they met Peter Farnan (vocals and guitar). Their early success was due entirely to word of mouth as they had no recording contract. As the popularity of their music grew the the number of gigs increased and they would play regularly. By the late 80's Serious Young Insects has opened for bands like XTC, and the Cure. What set this band apart from many others was that all three were singer song writers and as such provided the band with lots of material, and also different styles. Their first single release in 1981 was "Trouble Understanding Words". In early 1982 they released their first album Housebreaking which was worked on by veteran engineer John French. The first single of the album was called "Be Patient" it wasn't well received. In October of 1982 the third single was release "Faraway Places". slightly better response. They did some touring that year but that's pretty much it, they did their last gig in December 1982. They played over 35 songs and came off stage arguing over what they forgot to play, end of story, if Ive forgot anything lemme know...

B-Movie was a New Wave band from Mansfield England active in the first half of the 1980s. They released this tune 'Nowhere Girl' in 1982, it's probably my second favorite single, it made the Top 10 in many European countries and reached 68 in the United Kingdom. My favorite single was "A Letter from a Far" but unfortunately they never made a video for it...or at least I don't think they did, but then again wtf do I know...

Another bad week for music...- Ron Asheton, a guitarist and founding member of the influential rock band The Stooges, has passed away at his home in Ann Arbor, Michigan last Tuesday he was 60 years old. The Stooges formed in 1967, with a lineup that consisted of Ron Asheton his brother Scott on drums and the late Dave Alexander on bass and of course Iggy Pop on vocals. Known for a violent and primitive style that featured stage-diving and outrageous antics by Pop, The Stooges were part of a late 1960s Detroit-area rock scene.

We are shocked and shaken by the news of Ron’s death. He was a great friend, brother, musician, trooper. Irreplaceable. He will be missed.

For all that knew him behind the façade of Mr Cool & Quirky, he was a kind-hearted, genuine, warm person who always believed that people meant well even if they did not.

As a musician Ron was The Guitar God, idol to follow and inspire others. That is how he will be remembered by people who had a great pleasure to work with him, learn from him and share good and bad times with him.

I am in shock. He was my best friend.

Iggy Pop
.
Thanks Steve
Posted by Sandman at 6:09 PM No comments: