Some of the Concerts coming to town very very soon...
.
PIL - Public Image Limited - Kool Hause - Toronto - Friday May 7th - This might be the last chance to see Johnny Lydon and the boys, they don't come to town that often.
.
The Spoons - Tatoo Rock Parlour - Friday April 30th - This is a 30th Anniversary Party and they always put on a great show. It will likley Sell out so get there early.
.
Echo and the Bunnymen - The Phoenix- Friday April 23 - A great band, that always draws a big crowd when they hit Toronto. Don't wait until the last second for this one.
.
Massive Attack - The Sound Academy - May 7th and 9th - I've never had a chance to see them, need to mark this one on my calender.
Posted by Sandman at 3:46 PM No comments: 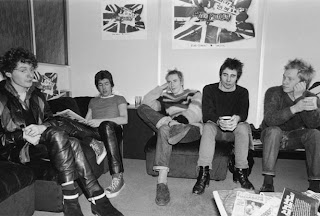 ....I was saddened to hear Malcolm McLaren, the former manager of The Sex Pistols and The New York Dolls has died, he was only 64. McLaren was one of the guiding forces behind the punk movement in the 1970's, he gained most of his notoriety as manager of The Sex Pistols, who shot to fame with irreverent songs like "God Save The Queen" and "Anarchy in the UK", during 1977. To help boost publicity for the band, McLaren organized a boat charter, having the Pistols play God Save The Queen on the River Thames, in front of the British House of Parliament. The Pistols split up after only one year but their influence continues to be felt to this day. Legal battles between McLaren and John Lydon continued until Lydon successfully sued McLaren in 1987 for contract rights and unpaid revenues. I think it's safe to say Johnny won't be attending the funeral.
...I think in a thousand years, three bands, above all others will define the Rock Music era of the twentieth century. The Beatles, The Rolling Stones, and The Sex Pistols. Admittedly, I've never has much use for the first two, but the Pistols have always been among my favorite bands of all time.
Posted by Sandman at 3:58 PM No comments: