....Part of a group that would have driven your parent absolutely nuts. An Australian artist and the frontman for "Jimmy and the Boys" a shock rock group that featured obscene lyrics and imagery among other things. Their act included horror related theatrics, S&M, transvestism, self mutilation, simulated sex, drug abuse and even a mock rape enactment all in an attempt to convey the degeneration of our society. The core of the group form in 1976 and included Ignacius as well as keyboard player Joylene Hairmouth who was a transvestite.
Posted by Sandman at 10:29 PM No comments:

.....I read an article on Yahoo today and that's precisely how it started and I have to be honest it made me laugh. Bono Vox is apparently unhappy with the sales of U2's latest album "No Line On The Horizon" not gonna go into details, suffice to say he's blaming the record industry which is increasingly being geared towards pop music. Don't get me wrong, I like U2 but to blame pop and suggest the lackluster sales are because rock'n'roll is dying would be to suggest that U2 is rock band ...THEY'RE NOT... U2 is in fact a POP band and have been so for at least 20 years. Second to perhaps only Abba they're the most successful pop band in history. Obviously they aren't making the same kinda pop as "Brittney Spears" or the "INSYNC" but they are in fact a Pop group, I hope this doesn't offend anyone not trying to be offensive but I gotta call it the way I see it. The last legitimate rock album U2 put out was "War" and by the time the "Joshua Tree" was released they'd made the full transition into main stream music. In saying that I need to be clear, there is nothing wrong with pop, I like a lot of pop bands, probably more than I should, but for Bono to blame the very thing that is responsible for U2's success, as the instrument of their failure is in my opinion quite ridiculous...
Posted by Sandman at 3:18 PM No comments: 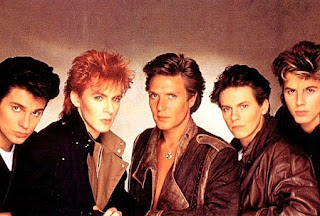 ....Few bands during the 80's polarized music fans quite as much as these guys, most people had an opinion either ya loved them or you hated them. Were they legitimate New Romantic pioneers or sugar coated garbage? I'm still trying to decide. I talked to many who feel Duran Duran were all style a no substance, while others feel they were one of the most important groups to emerge in the 80's. Considering they've been around for close to thirty years and still making albums perhaps it's time  to cut them a little slack.
.....Duran Duran is a New Romantic band from Birmingham, England. They were one of the most successful groups of the 1980's spearheading what many at the time called the second British Invasion. There original line up consisted of Nick Rhodes, John Taylor, Stephen (Tin Tin) Duffy, and later Roger Taylor, after numerous personnel changes, Andy Taylor, and Simon Le Bon were also added while Tin Tin departed. band's first album, Duran Duran, was released on the EMI label in 1981 it yielded three singles "Planet Earth", "Careless Memories" and of course "Girls On Film" the video to which created so much of controversy was banned by the BBC and heavily edited for MTV. The second album Rio released in 1982 was the one that broke Duran Duran world wide, yielding no less than 5 singles they charted across the planet and they became for a time the biggest band in the world.  A world tour followed, in support of the album and MTV seemed to play their videos 24/7 their images were splashed across every magazine on the planet as the mania spread. When I look back on it now in my mind it seems like it went on forever, but in reality the bulk of their success was achieved over a relatively short period of time between 82 and 85, by the time their fourth album "Notorious" was release in 86 much of the hype had subsided and their popularity wained. Still can't take away from what they did, for a short time during the 80's Duran Duran were being compared to the Beetles a band above all others, an astounding feet to say the least.
....Duran Duran is now in their 28 year and have released a total of 13 albums, the line up has changed over time as members come and go. They still tour pretty regularly to the thrill of their fans, in fact just this summer they were in Toronto to play a sold out Air Canada Center. They still look and sound great after almost 30 years. The Wedding Album released in 1993 is absolutely ingenious and perhaps their best work.
.
Duran Duran's line up during their period of Global domination 81-85 is as follows..
.
Simon Le Bon
Nick Rhodes
John Taylor
Roger Taylor
Andy Taylor
.
Other past and present members are as follows...
.
Dominic Brown
Sterling Campbell
Warren Cuccurullo
Stephen Duffy
Andy Wickett
Simon Colley
Alan Curtis
Jeff Thomas
.
I've Included below the video "Save A Prayer" released in August 1982 perhaps a bit sappy but still my favorite song by the band...
.