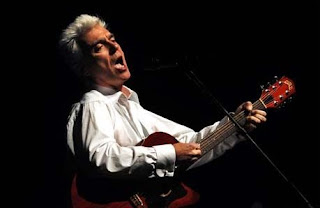 It's great to see he's still going strong...As a member of the legendary new-wave pioneers Talking Heads, David Byrne has captivated audiences for over 30 years. And now, as a solo he is touring his latest record, Everything That Happens Will Happen Today, Byrne pulled into Vancouver for a stop at the Queen Elizabeth Theater last Friday evening Feb 20th. Byrne's latest record is his first collaboration with famed producer Brian Eno in 17 years. He is touring with a four member backing band and three back-up singers this time. During their lengthy set they played material from the new release and also some classics like "Once In A Lifetime" and "Take Me To The River", for those that may not be familiar with his new work. By all accounts it was a great show, the sell out crowd spent most of the night on their feet, I wish I could have been there...
Posted by Sandman at 8:02 AM No comments: 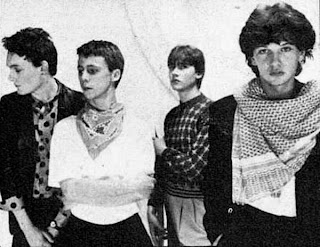 ....One of those odd ball new wave bands that I used to like but had a hard time following because the material available was so limited. Two of the most phenomenal club singles from the 80's were released by this relatively unknown band. "A Letter From A Far", which I bought 12'inch single back in 84 still in my opinion one of the best songs of all time, and "Nowhere Girl" their most popular single. Surprisingly the bands most successful single in the UK was "Remembrance Days" which although good is in my opinion the weakest of the three songs.
....From Mansfield England the formed in 1978, active in the first half of the 1980,s they called themselves B-Movie after an Andy Warhol painting of the same name. They were originally signed to the Some Bizzare record label. Bizzare Records was a British independent record label founded in 1981, with the release of Some Bizzare Album , a compilation of unsigned bands including Depeche Mode , Soft Cell , The The and Blancmange. Though B-Movie release a number of singles they didn't actually release an entire album until 1985, the album was called Forever Running ( Sire Records ) unfortunately is was a commercial failure. Shortly after it's release the band broke up, each going their separate ways, most joining with other bands. 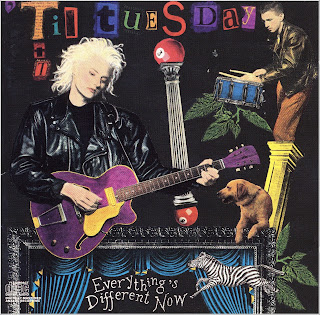 An American contribution to the New Wave scene exceeding by far most others, an absolute a tour de force. Released in 1988 it was Til Tuesday's third and final album, much like the second album it was poorly promoted by Epic Records and as a result it finished up at position 124 on the Billboard Top 200. A tradgedy to be sure, and as usual it's the music fans that suffer the most, a gem has been lost to the masses forever. Few, if any below the age of thirty-five will even know of it's existence, much less be inclined to buy it. The only single to be released "( Believed You Were) Lucky" although an excellent song, was far from the best. Four songs in particular " Everything's Different Now", "Rip In Heaven", "Long Gone" and "How Can You Give Up" each stronger than the lead off single should have also been released. Bring me the record executive that is responsible for this debacle, I want his f##kin head on a platter, material like this should not be allowed to fade into obscurity. The whole album is strong, there in no fill on this record at all, once more Aimee Mann shows her incredible singer / song writer ability. I've listened to this album countless time over the years and will continue to in the future...
.
Track Listing
.
1. Everythings Different Now
2. Rip In Heaven
3. Why Must I.
4. J For Jules
5. ( Believed You Were ) Lucky
6. Limits To Love
7. Long Gone (Buddy)
8. The Other End ( Of the Telescope )
9. Crash and Burn
10. How Can You Give Up
.
Til Tuesday Are...
.
Aimee Mann............ bassist/vocalist
Michael Hausman......drums
Robert Holm...........guitarist/ background vocalist
Michael Montes........keyboards (replaced Joey Pesce previously on keyboards )
.
Below I'll include the video "Lucky", the one single to be released, but as previously stated, although it is a great tune it is far from the best this disc had to offer...
Posted by Sandman at 5:17 PM No comments: